“Experts” participating at the NIH Consensus Conference on Lactose Intolerance argued for including more pasteurized and homogenized dairy in the American diet, even for those who experience adverse physical symptoms called “lactose intolerance.” The Weston A. Price Foundation had a booth at the conference, held at the National Institutes of Health in Bethesda, Maryland, February 22-24.

The experts presenting at the conference built a case for the vital importance of dairy in the human diet, and stressed the idea that those who avoid dairy are setting themselves up for major nutrient deficiencies, particularly of vitamin D and calcium. They also noted that African Americans and Asians are more likely to avoid conventional dairy milk they suffer from higher levels of lactose intolerance than the general population, and as a result are likely to be deficient in these nutrients. Lactose intolerance, the inability to digest the milk sugar called lactose, often causes digestive symptoms such as bloating, cramps, excessive gas and discomfort.

The conference was a great opportunity for us to educate dieticians, physicians, and academic experts about the benefits of raw milk and whole foods. We explained that over 80 percent of those who experience lactose intolerance find that they can drink raw milk with no problem, because it contains beneficial bacteria that produce the enzyme lactase. We also explained that many whose ancestors drank fermented milks (in which lactose is pre-digested by pro-biotic bacteria,) such as kefir or clabber, will do best to seek out these traditional forms of milk for themselves. As expected, none of the panelists presented information on studies, personal observations or interviews with patients regarding this simple yet effective solution to lactose intolerance.

The WAPF booth was very effective in filling that gap in the conference program. Nearly everyone attending the conference took our Campaign for Real Milk brochure, which we offered it to them on their way in and out of the conference. Many others visited our booth and took our membership brochure and other materials. Interestingly, the lactose intolerant individuals were the most open to our message, and were hungry for answers. A number expressed interest in securing access to raw milk. One angry woman did confront us, as well as the NIH staff, about our presence there. She felt it was inappropriate for us to promote raw milk in a state where it is illegal to sell it. Fortunately, NIH staff were very firm about our free speech rights and defended their decision to invite us to exhibit. (See a reply to the “angry lady” at http://hartkeisonline.com.)

Speakers talked about “perceived lactose intolerance” in the patient and claimed that patients don’t have lactose intolerance unless diagnosed by a physician. But common sense tells us that if the milk hurts, people will avoid it, whether they have gotten an official diagnosis or not. Expert participants in the audience noted that the test that confirms this “diagnosis” can easily give false negatives if the patient had recently been on antibiotics or had a varying strain of bacteria in the colon. Some may have an allergy or intolerance to the altered protein in processed dairy, not the lactose, but this was not discussed, only in a passing comment.

The panelist-speakers, primarily academicians with ties to pharmaceutical companies or food manufacturers and trade associations, made no distinction between types of milk, pasteurized, homogenized, or powdered. Nor did any speaker explore the effect of homogenized milk on lactose intolerance. A physician expert even promoted strawberry and chocolate milks, high in sugars and containing artificial additives, as a way to get more dairy into children. Cheese and yogurt were also mentioned several times as options for getting the nutrients of concern.

The raw milk movement continues to grow as consumers discover the health benefits of fresh milk which comes from cows treated humanely and fed appropriately. We felt privileged to be at this conference to carry this message to health professionals and academic researchers. We hope we put farm fresh dairy on the table for future discussions.

To see the final statement issued by the consensus conference, visit this link: http://consensus.nih.gov/2010/images/lactose/lactose_draftstatement.pdf. 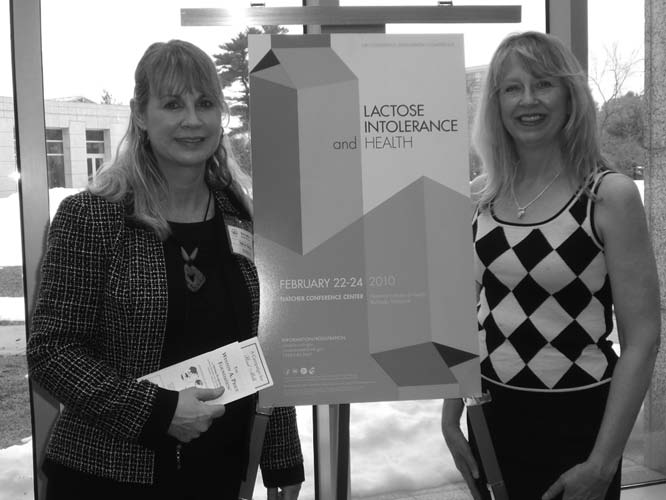 Sylvia P. Onusic holds a PhD in Health Education and Nutrition. She has completed all coursework to qualify for Registered Dietician. She is also a certified nutrition teacher in Pennsylvania and has taught nutrition in local high schools and on the university level. She is a member of the American Society for Nutrition. Sylvia will be speaking at the upcoming Raw Milk Symposium, to be held in Wisconsin April 2010, on Raw Milk Perspectives in Europe.