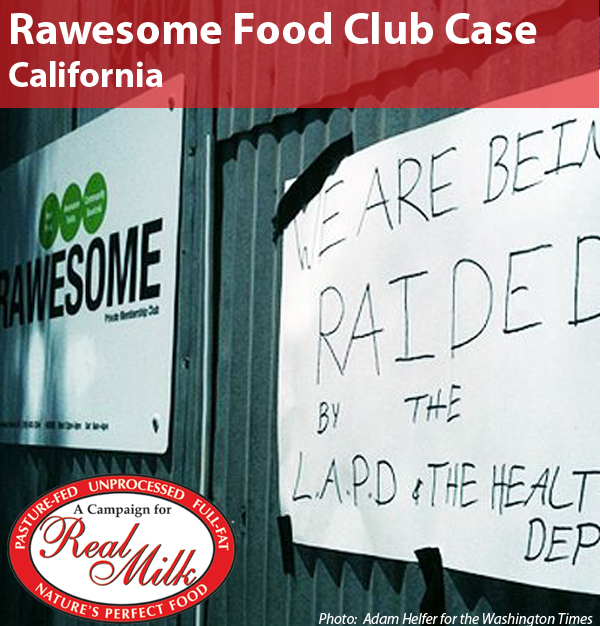 On August 3, 2011 federal, state and local government officials raided the Rawesome Foods store in Venice, seizing food, records, computers and cash from the store. The officials seized almost the entire food inventory at the store, dumping out all the raw milk on the premises and carting the rest of the seized food out on trucks that were suspected to be heading towards a county landfill. At the same time this was going on, police were arresting James Stewart, Sharon Palmer and Victoria Bloch.

Stewart, the owner of the Rawesome store in Venice, had defied an order by the Los Angeles County Health Department prohibiting the re-opening of the store after it was temporarily shut down by a government raid on June 30, 2010 (see Fall 2010 update below for background). He believed the court had no jurisdiction over the club and reopened the next day. Government officials seized records and a computer from Stewart’s home as well, in addition to taking nine thousand dollars in cash he had on his person. Stewart was charged with thirteen felony and misdemeanor counts, the majority of which related to the production and sale of raw milk and raw milk products. Bail was originally set at one hundred twenty-three thousand but was later reduced to thirty thousand dollars. Before he was released, Stewart had to prove to the judge that the bail money did not come from his business proceeds, a treatment mostly reserved for drug dealers.

Palmer, the owner of Healthy Family Farm in Santa Paula, had been raided three times before by government officials and had been arrested in 2008 for the production and sale of raw dairy products. Like Stewart, the majority of the ten felony and misdemeanor counts she was charged with were related to the production and sale of raw dairy products. Bail was set at over one hundred twenty thousand dollars but later reduced to sixty thousand dollars. Palmer also had to prove to the judge that the bail money did not come from her business proceeds.

Bloch, the Weston A. Price Los Angeles chapter leader, worked for Palmer as an independent contractor taking orders, signing members up for Palmer’s CSA and being responsible for communications for the farmer. Bloch was charged with three felony conspiracy counts related to the sale and distribution of raw dairy products and labeling violations. The three underlying crimes that Bloch was charged with “conspiring to commit” were misdemeanors. Bail for the WAPF chapter leader was initially set at sixty thousand dollars but she was released on her own recognizance.

Much of the illegal activity the three were accused of centered on a herdshare contract the Rawesome Club in Venice had with Palmer. Rawesome owned forty goats that were boarded at Palmer’s farm. As part of the contract, Palmer was to provide raw dairy products to the Rawesome members. Criminalizing Rawesome’s use of its property is an ominous development for food freedom of choice and the sanctity of private contract. An agreement like the one Rawesome had with Palmer was the only way its members could obtain raw goat milk and raw goat milk products within the state of California (see Sharon Palmer case, Summer 2009 update for background).

There were nine different government agencies taking part in the investigation of Rawesome and Healthy Family Farms including the U.S. Food and Drug Administration (FDA), the California Department of Food and Agriculture (CDFA), the Los Angeles County Department of Public Health, and the California Franchise Tax Board. The questions now arising involve who funded the investigation and why the state of California is putting so much time and resources into the investigation at a time when the state is in such poor condition financially. There had not been any complaint about anyone becoming sick from consuming the food produced at Rawesome. The Rawesome raid was the most extreme police state action taken yet in an effort to criminalize the activities of those who have opted out of the government-sanctioned food system.

A pretrial hearing has been scheduled for the Rawesome defendants in the Los Angeles County Superior Court October 6.

In what has been a year of increased raids and enforcement actions against raw milk producers and distributors around the country, no action has been bigger nor received more attention than the raid on the Rawesome Food Club in Venice. On June 30 federal, state and Los Angeles County officials executed a criminal search warrant against Rawesome, a private food buying club whose store was not open to members of the general public. The officials were accompanied by police who entered the store with guns drawn; this was captured on video and later viewed by thousands on the internet.

According to Aajonus Vonderplanitz, president of Rawesome, the officials seized seventeen coolers of food, mostly raw dairy products and honey—even though the search warrant only called for the officials to take food samples. The county health department issued a notice that the store was now closed. Among the government agencies represented at the raid were the Food and Drug Administration (FDA), Federal Bureau of Investigation (FBI), the California Department of Food and Agriculture (CDFA), and the Los Angeles City District Attorney’s office.

Rawesome has many affiliated private food buying clubs around the country. Vonderplanitz has long stood up to any federal, state or local government agency harassment of club members and the farmers providing them food. He stated that the raid on the Venice store was most likely due to his recent actions to protect dairies in Wisconsin, Pennsylvania and Illinois that had been raided by state and federal agencies.

On the day Rawesome was raided, state and county government officials also executed a criminal search warrant against Santa Paula farmer Sharon Palmer; it marked the third time a criminal search warrant had been executed against Palmer in the past year and a half. Her suspected crime was boarding goats owned by Rawesome and providing raw milk and raw milk products to its members. Shortly after the raid, Rawesome and Palmer mutually agreed to terminate the boarding contract.

On July 1, an attorney for Rawesome along with store manager, James Stewart, appeared at a Los Angeles County administrative hearing to address a violation cited against the club for operating their store without a permit. The attorney challenged the jurisdiction of the county over the store; the county officials ignored the challenge and instead presented statements admitting violations for Stewart and the attorney to sign. Both refused, with the attorney informing the officials that the store would be open to its members. On July 3, Rawesome reopened without incident.

The raid on Rawesome was widely criticized for its police state tactics; possibly for this reason none of the agencies participating in the raid followed up with any further action against the buying club. Instead, the Los Angeles Department of Building and Safety was the next to go after Rawesome, issuing a closure notice to the store on August 18 for alleged building code violations. Rawesome is working with a building and safety engineer to establish that the property did not violate building or zoning standards.

The fallout from the raid extended beyond California; some of the raw cheese confiscated during the raid was manufactured by a farmstead cheese operation, Morningland Dairy of Mountain View, Missouri. When a sample of the dairy’s cheese taken by CDFA tested positive for Listeria monocytogenes, the Missouri State Milk Board and FDA pressured the dairy to recall over 60,000 pounds of cheese. There had been no reports of anyone being ill from consuming the Morningland Dairy cheese.

Vonderplanitz stated his intent to sue the government agencies and officials involved in the raid. In his words, “We have a David and Goliath situation here. We must produce the funds to produce this raid in judicial and civil courts now before we do not have another opportunity.”