Why You Can Rely on Raw Cheeses 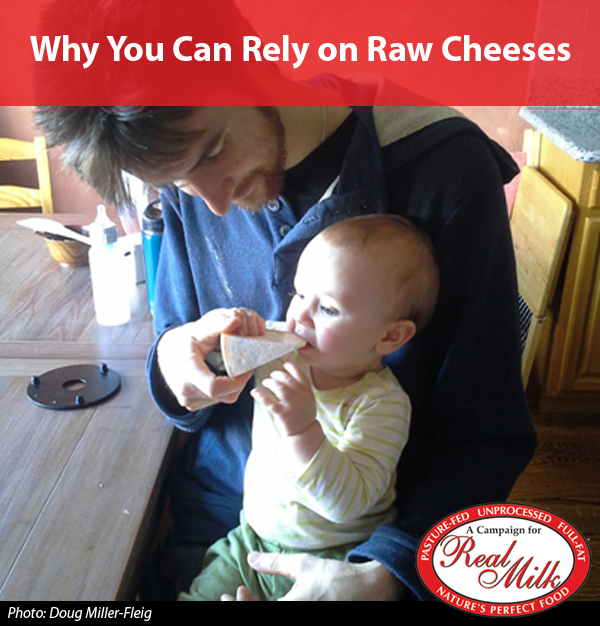 By Arthur Cunyngham and John Dennis
Read this page in French

The August issue of Dairy Industry News carried an article by Nicol and Robinson entitled “The Taste Test.” They acknowledged that increasing numbers of consumers are discovering that cheese made from unpasteurized milk tastes better than that made from pasteurized milk. They contended that such cheeses are unsafe and sought to rectify this by seeking to improve the flavor of pasteurized milk cheese by adding back to the pasteurized milk pure cultures of nonpathogenic organisms commonly found in raw milk.

Unfortunately, their proposition falls down under its initial premise because cheese made from unpasteurized milk is perfectly safe, at least when made to the exacting standards applied by members of the Specialist Cheesemakers’ Association (SCA). Further, the proposition that the flavor of cheese made from pasteurized milk may be improved by adding back cultures of nonpathogenic organisms present in raw milk is naive.

Safety of cheese made from unpasteurized milk

No system can guarantee the elimination of all pathogenic microorganisms in a particular food product. Thus procedures have been developed which seek to minimize risk to an acceptable level. For example, one of the most stringent procedures undertaken by the food industry is the “botulinum cook,” a heat treatment of 121o C for 3 minutes applied to canned products. Nevertheless, even under these extreme conditions, there remains a small but finite probability (1 can in 1012) that a viable Clostridium botulinum spore might be present after this procedure.1

Pasteurization is not a panacea. It is possible for spore forming bacteria such as Bacillus cereus to survive pasteurization and spoilage of pasteurized milk can occur if excessive numbers of thermoduric bacteria are present in the starting milk.2 Perhaps more importantly, a number of food poisoning outbreaks have been attributed to consumption of pasteurized milk-either because of failure in the technology or because of subsequent recontamination of the pasteurized milk supply. In one of the worst incidents of food poisoning involving cheese (Swiss Vacherin Mont d’Or with 34 deaths) it has been clearly established that the contamination with L. monocytogenes was not due to its presence in the milk before production (thus making the question of pasteurization irrelevant) but arose because of contamination in the dairies and cellars where the cheese was stored.3 Similar examples have been reported of food poisoning incidents arising from unpasteurized milk due to contamination with Salmonella, Campylobacter, Listeria, Yersinia, Staphylococcus, Bacillus cereus and Escherichia coli.2

It has been widely argued that post-production contamination is more likely in a pasteurized milk cheese than in an unpasteurized one because the reduced number of competitive flora allows greater scope for pathogenic bacteria to multiply. It has long been known that, in mixed culture, gram-negative organisms compete with each other, some species growing more slowly than they would have in pure culture. This is known as the “Jameson effect” and the difficulties that microbiologists have had in isolating dangerous E. Coli 0157 from samples containing high levels of other E. Coli strains may be attributable to this effect.4

Thus the safety of cheese depends not on the microbiological quality of milk at a single time point during the manufacturing process but on a careful assessment of the cheesemaking process as a whole, applying Hazard Analysis Critical Control Point (HAACP) principles, to produce a final product which can be consumed with confidence (and enjoyment!)

The very nature of the cheesemaking process, with its fundamental objective of preserving milk for consumption at a later date, has in-built processes which help ensure the safety of the final product. In particular, the acidification, salting and drying that take place will act to deter the presence of potentially pathogenic bacteria in the final product.

Nonetheless an important issue for the cheesemaker is whether the milk which he proposes to use is of acceptable bacteriological quality for the type of cheese to be made. Some SCA members choose to pasteurize, often because they are unable to satisfy themselves of the microbiological quality of the milk. This will also usually be the case where cheese is made on an industrial scale, when pasteurization is normally essential in order to achieve an acceptable microbiological quality for the large volume of milk required. However for an artisan cheesemaker producing cheese by traditional processes, good quality milk can be achieved in the smaller volumes required without recourse to pasteurization. Often, this is achieved from cheesemakers’ own herd or from neighboring farms prepared to supply milk to the standards required for making unpasteurized milk cheese.

The Specialist Cheesemakers’ Association has provided members with detailed advice5 on how to produce unpasteurized milk which is suitable for cheesemaking. While the full details are too extensive for inclusion in this article, the areas covered include animal health and welfare, udder and teat infections, mastitis control, hazards of the farm environment, equipment hazards, cleaning schedules and milk handling procedures.

Quality of cheese made from unpasteurized milk

Having established that commercially made unpasteurized milk cheese is superior in taste to the pasteurized milk product (a conclusion with which we heartily concur) Nicol and Robinson propose that this must be because of the contribution of nonstarter bacteria and that “they must be present in high numbers if they are to make an impact.” They then argue that if these harmless saprophytes are present in high numbers it is likely that pathogens may be present as well. The implication is that the better the quality of the product the more its safety is questionable!

This tortuous argument fails because the initial premise is incorrect. If it was necessary to have high numbers of nonstarter bacteria to obtain acceptable quality for unpasteurized milk cheese then high quality milk standards might result in quality problems for the cheesemaker. In fact the reverse is true. Professional cheesemakers of the SCA do not report problems with the flavor of their product when utilizing milks of the lowest colony forming units. This observation is supported by research reports which “have concluded that nonstarter bacteria have little effect on normal Cheddar cheese flavor development.”6 Indeed high levels of bacteria are undesirable in milk for cheese production, even when the milk is to be pasteurized, since thermostable lipolytic enzymes from psychrotrophic [cold loving] bacteria may lead to undesirable off flavors.7

Nicol and Robinson concluded that, in their experimental product, their taste panel was unable to distinguish significant differences in the flavor of the cheeses made from raw and pasteurized milk. Since this is contrary to the observations of both experienced cheesemakers and consumers it is worth considering what may have gone wrong with their product. Firstly, their observation that the cheese made from pasteurized milk had a higher water content is in accord with observations made by specialist cheesemakers who find it necessary to alter the cheesemaking process when using pasteurized milk. Syneresis (the release of whey from the curds) is sensitive to pasteurization temperature with increased temperature leading to decreased syneresis.8 Thus using the same procedures for pasteurized and unpasteurized milk will inevitably lead to a higher water content in the pasteurized product. It is also worth noting that milks with very low [bacterial] cell counts tend to give better curd than those from the normal bulk milk supply8 which is another reason why high quality milk should be used for cheesemaking.

In terms of the flavor of the final product, Nicol and Robinson have emphasized the contribution made by nonstarter bacteria to the flavor profile of unpasteurized milk cheeses. Macedo et al9 reviewed the manufacture of Serra cheese made in Portugal from raw ewes milk. The product appears to have suffered (at the time of the review) a considerable microbial contamination because of poor sanitary conditions used in manufacture and hence suffered from wide variations in final quality. Thus an extensive and uncontrolled contribution from nonstarter bacteria will not contribute to a high quality product.

Of course, it is possible that small numbers of nonpathogenic organisms may contribute to the subtleties of flavor of unpasteurized milk cheese. Equally it is just as likely that the natural enzymes present in unpasteurized milk make an important contribution to the complex flavor profile.10 Pasteurization denatures these enzymes and hence they will not be available to contribute to the flavor of the final product.

At an International Conference of Microbiologists in France last year,11 speaker after speaker confirmed their belief in the superior quality of cheeses made from unpasteurized milk with quotes such as the following:

“Pasteurization leads to reduced intensities of the typical flavor of Bergkase. It may therefore be concluded that it is essential to use raw milk for the production of Bergkase with satisfactory product properties.” —H. Rohn, University of Vienna, Austria.

“There is general agreement that cheeses made from raw milk develop a stronger flavor than cheeses made with pasteurized milk.” —Paul McSweeney, Department of Food Science & Technology, University College, Cork, Ireland.

Cheese of all types (including unpasteurized) accounts for just 0.1% of UK food poisoning outbreaks and so those who choose cheese are choosing a food which is delicious, nutritious and, in comparison with other foods, extremely safe. Last year 10 out of the 18 class winners at The British Cheese Awards were made from unpasteurized milk. These superior quality standards are fully matched by an enviable safety record when compared to other foods.

This article appeared in the Fall 2000 edition of Wise Traditions, the quarterly journal of the Weston A. Price Foundation.